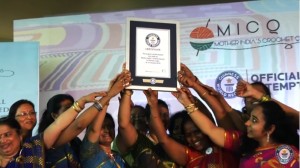 It is quite an accomplishment to find yourself in the Guinness book of Records. It means to make something extraordinary, something that was never done and is pretty hard to mimic to say at least. Athletes, scientists, entertainers, simply ordinary people with not so ordinary talents and creative approaches strive to make a history. Crocheters are no exception.

Guinness World Records announced earlier this year that Mother India’s Crochet Queens made the largest crochet blanket in the world, at least the largest that has been measured but I doubt that there was something nearly as big as the one that this unique crochet group had created. The blanket measured at 11,148.5 m2. Pretty impressive, isn’t it? Guinness Records officials traveled to Chennai. India and verified the record.

Take a Look at a Blanket Here